Twinky whore hole free to use for everyone

Gorgeous lad Jack Green has picked the right pub. The entertainment for the evening has arrived, roped up and gagged upstairs. Twinky whore Billy Rock has already been fucked by a couple of the bar staff but Jack has arrived before the rush so the boy's hole ist tight and fresh still. Jack starts out fingering the greedy pucker and licking out that hole. He's gonna make use of this ass before the other customers gather to gang up on the boy, feeding Billy his own gorgeous length of fuck meat, making the slut gag on his shaft and drip spit, then taking aim at his hole and stuffing his awesome dick inside. Billy might be the town whore but his ass feels so good around Jack's cock, his balls bouncing while he pumps his inches in and out, giving the greedy boy exactly what he wanted. He knows he can really pummel that experienced butt, fucking his new toy deep and only pulling out to give the slut his load. Wanking off in the lad's face he feels the pleasure rising, semen flooding from his helmet and raining down over the boy! With his load spent Jack walks away, but he'll probably be back to join the crowd in a gang fuck later. 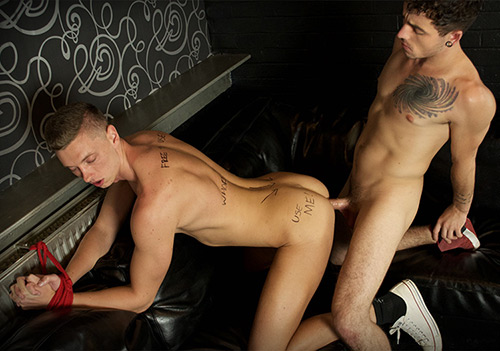