Koda Ducati Used As Fuck-Thing By Group Of Bare Fuckers

After taking a much-needed piss, Tyler Jenkins brings his workmates a present. He snatches scrawny lad, Koda Ducati, throws him in his van, and takes him to his mates Titus Snow and Sam Syron. These bullies are ready and waiting to fuck this virgin ass hard and raw. Brutally, they push Titus to his knees and make him gag as they ram their thick, meaty cocks into his mouth. Their boy-toy is bent over, fed dick, slapped and fucked. Meanwhile, their boss Jason Domino watches it all on CCTV. He’s seen something he likes, and he too wants to use Koda as his little fuck pig. Watch the ultimate bukkake-style cum shower next week! 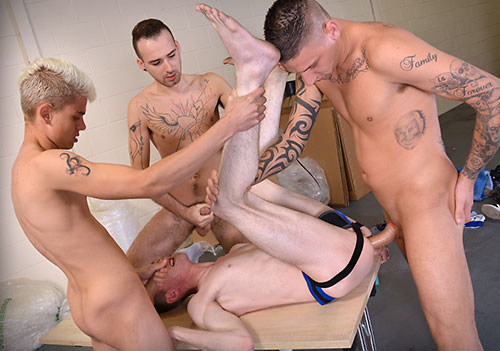