Sonny is quickly subdued once they’ve found the kinky lair waiting for them. In no time at all the boy is on the end of the leash and being led around by kinky dom boy Fabrice, his mouth exploring his new master’s crotch, clearly desperate for that dick. The sub boy is allowed to suck the big delicious dong, but not before Fabrice has exposed his ass and given him some thwacks with the paddle. Sonny worships the incredible dick in his face but he’d prefer it in his tight hole. Frabrice takes him from behind, pumping his big bare boner deep between the boys cheeks, fucking him hard while the sub boy desperately wanks his own bulging cock in his hand. With the promise of master’s cum in his face he jerks out his own messy load over himself, finally getting the delicious reward as Fabrice spurts his milky ball juice into his cute face. 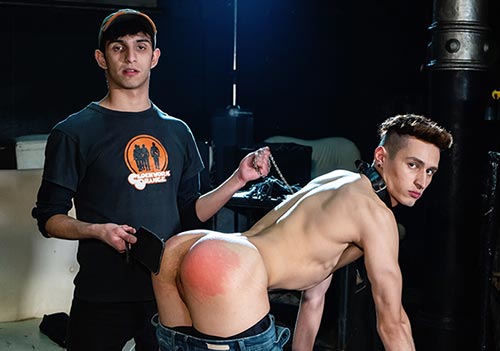