Aspiring photographer Antu is taking a few shots when he’s confronted by bully boy Michael. We all know that a hot bully loves nothing more than a mouth on his dick and a tight twink hole to fuck and he’s not letting little Antu go about his day until he’s satisfied. Out in the open, where any passerby might catch them, he makes the boy suck on his long uncut meat, his hooded helmet dripping precum into little Antu’s servile mouth. The timid boy tries hard to please, but this dom won’t leave until he’s used that tight twink hole to get his load gushing. Antu submits, wanking his own hard length while Michael fucks him from behind on the bridge, riding the steely meat on the steps and using his fleshy little tunnel to try to make the man shoot his seed. Finally ready Michael makes little Antu suck his cream down, spurting it right into the boys mouth. The taste of the fresh warm goo is enough to have little Antu wanking out his own jizz in a final release that ensures his freedom. 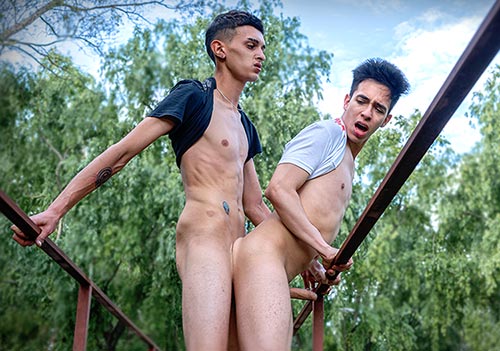