Matt (12 inch) Hughes is back, and this time he's behind bars with a cute French tourist (Ludovic Canot)and a corrupt Brazilian prison warden (Gio Cruz) to satisfy, leave it to this sexy Brit to fly the flag and leave no hole unsatisfied. Fred Faurtin is a police officer with an overly zealous style of strip search, Tony Thorne is on the receiving end of a rubber gloved hand and big, big French cock, in intimate, ultra close up. Dom De Marco is the debt collector with the brusque manner, take no prisoners attitude and ass pummelling donkey dick, he migt not get the debt paid but the poor lad on the receiving end of that tool has learnt a valuable lesson. Fred Faurtin is back with Tyson, in Tyson's only bottoming scene, the poor lad doesn't know what's hit him when big Fred goes to work on what was his once-tight hole. Fred eats and spit lubes Tyson's arse but its such a squeeze, Tyson looks like he's going to burst, but once Fred's started he's damn sure he's gonna finish the job. Jake Ryder is banged up with another overly endowed French guy - Thierry Lamasse - for the final scene, as Jake readily offers up his cute rump to Thierry's intrusive, gut stretching, uncut cock. Its foreskins aplenty in this behind-bars-bang-fest. 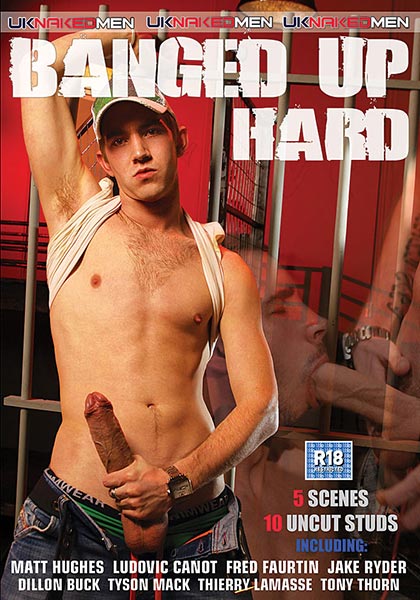 Back to all movies